The A90 Supra uses a ZF8 HP51 Transmission. This transmission is rated by ZF to handle 368FTLB of torque. However through testing many of us have seen the transmission seem to handle in excess of 500WTQ over a longer term use. On our test vehicle we have ran well over 600WTQ for almost 20k miles. Typically for daily driven cars we recommend on a stock turbo to stop around 550FTLB of torque. And on cars that want a little more aggressiveness we typically will tune around 600-650WTQ with stock / aftermarket turbos.

When people talk about the torque they make this is typically a peak value. And on a turbo charged engine this peak value occurs at a low RPM. As you rev up the torque drops. Below is a dyno plot of a stock turbo car running ethanol fuel. There are two seires of lines. You will see one series of lines that peaks at 550FTLB at around 4000RPM but as you see after 5000RPM the torque drops quite a bit. When we shift we will "land" at say 5500RPM, this gives us under 500FTLB of torque! Just because someone says they make 550FTLB of torque doesnt mean it would happen on a gear change! For this to happen you would have to floor it and shift at 5,500RPM. 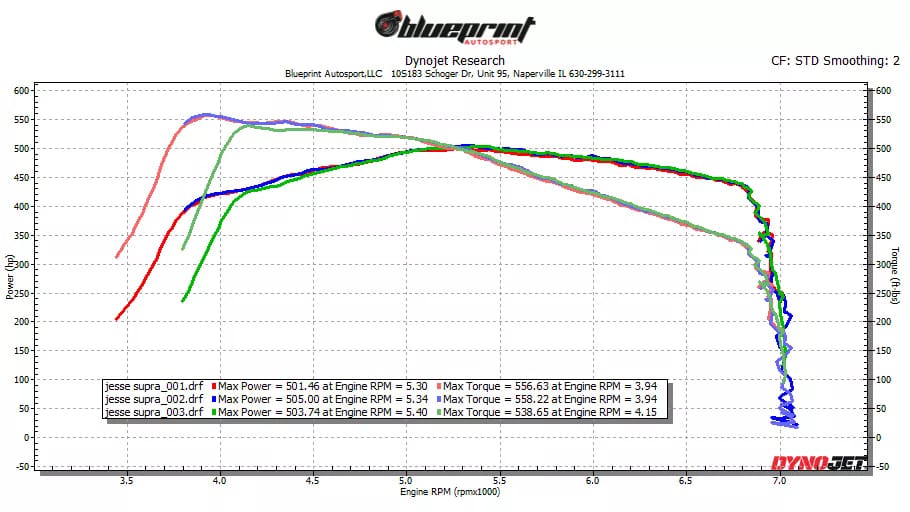 Now lets look at our shop car's dyno plot using a Pure 800 Turbo & Port injection running Ethanol Fuel. If you look at the grpah we makea bout 700WTQ at the peak area at about 4500-4800RPM. But you will see the same curve downards of torque as we rev hihger. However at 5,500RPM where we would land on a shift you will notice that we are well over 600WTQ. On this vehicle when we shift from 4th gear to 5th gear we dont get that nice firm shift. The car actually rev's up a little bit and then "catches". This is due to the clutch not being able to handle the full torque on engagement. However the car is able to hold it during the acceleration when we floor it. 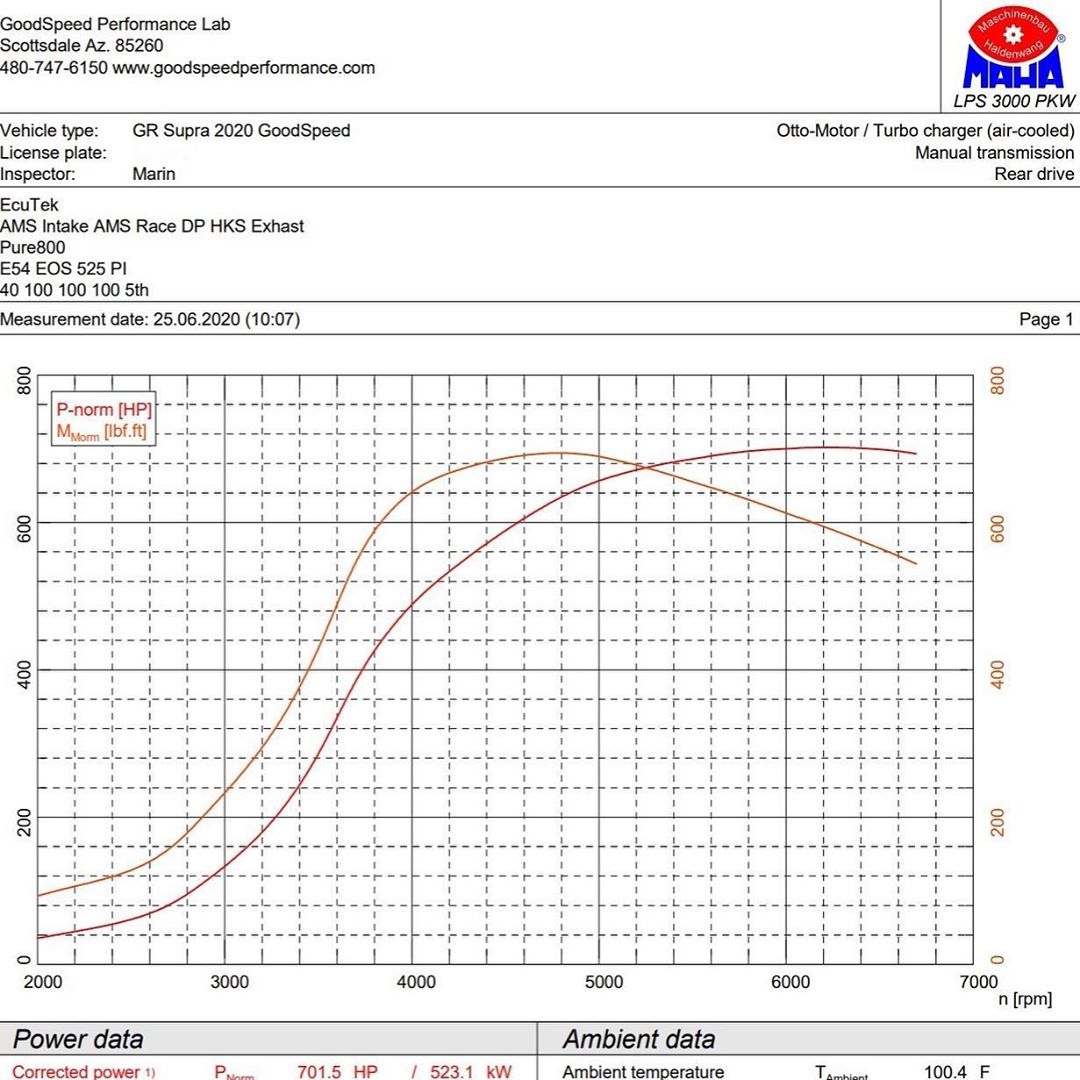 There are multiple clutch packs in the Supra Transmission. Each used for different gears. The clutch pack used for 6th gear is known to be the weakest clutch. This is likely a big portion of why the transmission is only rated for 368FTLB of torque. This gear is known to slip on shift at about 500FTLB of torque. And if you even floor it on an ethanol tune in sixth gear at 3500RPM sometimes the RPM will jump up like a manual transmission. Due to this sometimes the transmission will detect slip and protect its self. It will shift to the next gear and limit the cars power.

Car randomly goes to redline an sometimes will no longer accelerate

Sometimes when the transmission detects enough slip it will protect its self. It will attempt to shift to the next gear. However the gauge cluster will still display the current gear as it was not informed of a gear shift. When this happens the user typically loses the ability to shift gears. Sometimes shifting up to 8th and then back down will regain the control. However many times the car gets put into reduced power mode and requires you to pull over and restart the vehicle.

This issue happens after about 550FTLB of torque in sixth gear. This is also why when you look at drag slips all of the cars seem to hit the same MPH from 9.5-10.4 1/4 mile times. And its because on a stock tire you can do about 132-134MPH on the stock rev lmiter. however on a 28" drag tire you can run 137-142 range depending on your rev limiter. So most cars with the stock limiter ride 5th gear, or shift right at the end and if the transmission locks them out they just coast across the finish line.

So what can we do to remidy this?

So there are three main options that can be done to solve this.

Was this article helpful?

Thank you for your feedback

Sorry! We couldn't be helpful

Thank you for your feedback

We appreciate your effort and will try to fix the article

Articles in this folder -